Cis is often used as a slur against anyone who dares to question the hegemony of trans identities. So accused, the cis person is presumed to be in possession of cis privilege, a condition which actively oppresses “trans” people. 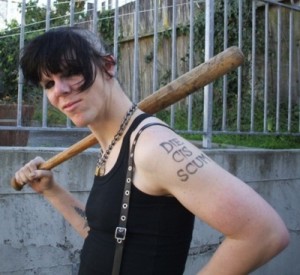 Unfortunately, the meaning of cis is ambiguous and, as a result, belies its proponents’ ignorance of social operations (see also: Cis privilege does not exist. Male privilege does.).

If cis is a word that simply refers to non-trans people (i.e., all people who have not subjectively adopted the term “trans” to describe themselves), then gender non-conforming butch women and feminine men must be included in the category of individuals who can be described as cis. Using this definition, cis privilege is not distributed according to whether one is gender conforming (or not), but rather, according to one’s internal I-dentity.

Significantly, oppression and privilege are functions of social perception, not reality.

A non-trans definition of cis erroneously assumes that an external observer can accurately and consistently determine when someone subjectively considers herself to be “trans.”  “Trans” is not a magical word, nor does it appear on your forehead like the Scarlet Letter when you interact with others. Therefore, framing cis privilege as something that automatically inures to all people who do not subjectively identify themselves as “trans,” and never to those who do, is frustratingly simplistic and ignores the gendered oppression of gender non-conforming people. If “non-trans” is the intended definition of the term cis, I reject its usefulness as a concept to describe or to better understand the social dynamics of gender and related oppression.

Alternatively, and this does seem to make somewhat more sense, cis may be used as shorthand for gender conformity (i.e., people who are comfortable with their gender role as assigned at birth). In this case, a person holding radical feminist views about gender could never be considered cis because she is, by definition of these views, uncomfortable with the social gender roles assigned to females at birth. More saliently, butch women and feminine men could not be considered cis under this definition, nor beneficiaries of cis privilege, because they do not benefit from social perceptions of their gender conformity.

Deviation from gender norms will result in the same kind of negative social treatment regardless of whether one considers herself internally “trans” or not. In many cases, a trans person who “passes” as her target sex will be treated by others as if she were not-trans; and a gender non-conforming cis person will be treated as if she were “trans.” Gender non-conformity oppression is not a phenomenon unique to subjectively identifying “trans” people.

A gender-conforming definition of cis further begs the question regarding what qualifies as “gender conformity” and where this cis line can reasonably be drawn. Is it measured by an individual’s appearance? Behavior? Or some of both? Many people express a mixture of masculine and feminine qualities– who decides whether they are cis and/or substantially benefiting from cis privilege? What about a person who changes their appearance, dressing femininely one day and masculine the next– can she be cis or cis privileged on some days but not others? What about a woman who is very aggressive and competitive in her professional life, but emotional and submissive in her personal life– is she cis privileged? And what about trans people who “pass” because they are compliant with the gendered stereotypes associated with their target sex– does being stealth render one functionally cis?

The ambiguity of gendered perception combined with the fluidity of gendered presentation renders the concept of cis confusing and largely incomprehensible when one attempts to apply the term in practice. Neither possible definition of cis brings clarity or new insights to the mechanics of gendered oppression. Just the opposite, by framing oppression as being caused by one’s internal identity, rather than by external social perceptions, a cis/trans binary actually erases the lives and experiences of many gender non-conforming people who refuse the label “trans” for themselves. Further, shoe-horning the concept of cis and cis privilege into conversations about gender as a rhetorical tool to explain how “trans” people’s experiences differ from non-trans people’s experiences, glosses over the complexities of how gender norms operate to create and maintain the still-pervasive system of male supremacy– also known as patriarchy (see: Cis privilege does not exist. Male privilege does.).

I reject cis as a workable political concept.

Feminism is not about personal self-assessments of empowerment wherein individual women learn to feel good about themselves–while women as a class are substantially deprived of  intellectual authority and socio-political influence.

Feminism is not about formal equality with men, such that women emulate male behavior and strive for male-defined “success.”

Feminism is not about the infinite inclusion of social causes within our purview.

Feminism is not about fantasies of revolution, mysticism, or the divine feminine.

Feminism is political. Feminism’s subject is the class:women.

Feminist analysis is directed at political structures, institutions, and principles of social organization.

Feminism deconstructs, with ultimate the purpose of destroying, artificial power relations between the sexes.

Feminist action aims to improve the status and lives of women as a class by confronting the social structures that support male supremacy.